It’s a thin line between art and news. What makes a photo iconic and is an iconic photo one that could be considered as art? Let’s take a moment to analyze one of them: the photo made by Yevgeny Khaldei.

It’s sometimes hard to determine what art really is. It isn’t always about those famous painters of the past, who made beautiful paintings. Also, it’s not always about sculptures made by famous or not-so-famous people.

When it comes to photography, it’s always a thin line between art and the reason why a photograph is taken. Sometimes the story behind the photo has nothing to do with art. These photos can still be considered as iconic. Iconic because they tell us something important. An event that took place, a change or whatever dominated the news on the day the photo was taken.

What about those photos that are still iconic, but aren’t really news photographs? Sometimes these photos show us a picture that isn’t accurate.

One of the photos that stand out is one photo taken by Yevgeny Khaldei (1917 – 1997). Many of his photos are considered as art. Even when they are “just” news photos. This is because these photos are taken like they are staged or they captured the moment perfectly. The photo that stands out is the one taken by Khaldei on 2 May 1945 in Berlin.

Raising a Flag over the Reichstag  / Знамя Победы над рейхстагом

At the time Khaldei took the photograph, the Third Reich of Adolf Hitler was dying. In fact, Hitler committed suicide on 30 April 1945. On this day, the flag of the Soviet Union was planted on the building of the Reichstag, where the German parliament met (nowadays, this building is again used by the German parliament). There was one problem: the time when the flag was planted on the Reichstag was after sunset. The exact time differed from the statement made by the Soviet Army. This was caused by rumors that the building had been captured by the army. When correspondents arrived at the Reichstag, they saw no Soviet troops. The correspondents were pinned down by German fire. Eventually, the flag was placed on the building at 22.40. During the nightly hours or the day after, the flag was taken down by the German troops, who still hadn’t surrendered. On 2 May 1945, the Soviet Army eventually captured the whole building. Khaldei brought another flag, made from a large table cloth and two soldiers raised this flag on the statue of Germania. The rest that followed was staged. It was Aleksei Kovalev who planted the flag. Later his name was removed from the credits as the NKVD appointed Aleksei Kovalev as the one who planted the flag.

When Khaldei returned home, he later edited the photograph. He added smoke from another photo he took, to make the scene more dramatic. He also removed one of the two watches that the soldier was wearing. The fact that he was wearing these two watches was evidence that this more solid committed war crimes (looting).

At the time the photo was taken and later edited Khaldei had to edit the photograph by hand. With the help of a needle, he removed the second watch from the photo.

Is this iconic photo a work of art? When you take into consideration that the events that took place weren’t quite accurate and the photo was later edited, it’s most certainly a work of art. It inspired many around the world to take photographs from events that are now considered as historic.

What’s your favorite iconic photograph and why is this art? 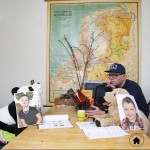